I am currently in the process of writing a software renderer in C for a game using the X11 library as a back end. At the moment it manages to create a window and render a scrolling pattern in to it, which isn’t too exciting, but even with a small amount of code I have learned first hand how easy it is to introduce pointer aliasing into C code and how damaging it can be to performance. 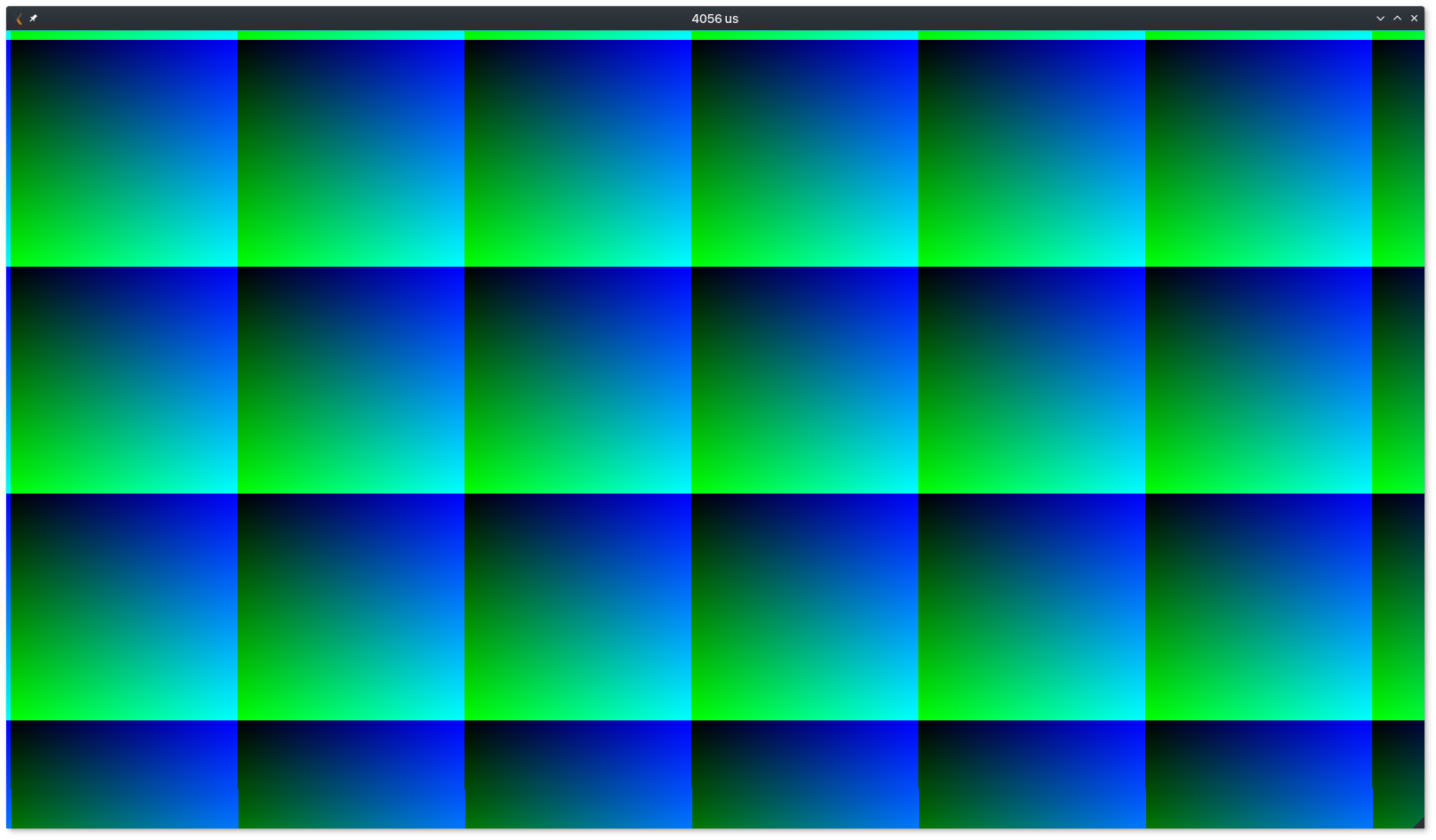 The code to render the pattern was fairly trivial:

It first allocates a back-buffer if it has not done so already and then loops through the pixels and assigns a colour to each one based in it’s XY position and an XY offset provided as an argument. The XPutImage function then copies the data from the back-buffer to the buffer that is displayed in the window.

As you can probably notice, this function not only has a large number of input parameters, but also modifies a lot of global state (pixels, display and ximage). I’m not proud of this code and was hesitant to post it, but hopefully you’ll appreciate it was a rapid prototype and will look past it for now.

In order to clean up the code I decided to gather all of the global state and window data into a global x11_context struct that would eventually be passed as a parameter via a pointer.

After this refactor I was surprised to be hit with a 35% increase in frame time compared with the old code (4.1ms -> 5.7ms). Almost immediately, I assumed I’d introduced some manner of pointer aliasing into the loop, but was somewhat confused as there was only a single pointer-dereference in that part of the code.

Experienced C and C++ programmers will already know about pointer aliasing and how it effects compiler optimisations, but it’s worth going over here if only to cement it in my mind.

A good, albeit contrived, example to demonstrate pointer aliasing is as can be seen on the Wikipedia page for the restrict keyword:

One fix for this is to use the restrict keyword which informs the compiler that the pointers all point to different locations and the onus is on the programmer to make sure that they don’t.

We could also manually cache the value ourselves, however this does not obviously signify that it is the clients job to make sure the pointers do not alias each other.

perf to the Rescue

In the update_window function above, there is only one pointer being dereferenced in the loop, so how can there be aliasing? I decided to crack out the perf profiling tool to find the hotspots in the assembly.

perf found that 95% samples occurred in the region around the inner loop1. The most interesting parts in this region are the mov %eax,-0x4(%rsi) instruction, which stores the result of the shift expression into the pixel memory location and the mov context+0xe4,%eax instruction which is the load from the context.width memory location into to the eax register to compare with the loop variable in edx.

I then had the realisation that the compiler cannot assume that pixels does not point to the memory location of context or context.width, meaning that it needs to be reloaded every time through through the loop. When width and height were passed in as parameters, they were allocated in update_window’s stack-frame and therefore pixels could never point them and it could keep width in a register, knowing it wouldn’t change.

This highlighted to me that pointer aliasing can occur not only between pointers, but between a pointer and any data that is not allocated inside the stack-frame of the currently executing function.

The solution to the this issue was to simply cache the width and height into a local variable and use that as part of the loop condition.

After this minor change, the performance was equivalent to the initial code and the output of perf did not show any significant hotspots. The compiler was able optimise away the load on every iteration and go even further and unroll the loop as it was able to determine that my width and height were constants elsewhere in the code.

This post demonstrates how relatively minor refactors of code can have a drastic effect on the performance of your program. Pointer aliasing issues are not as obvious if you include global variables in your program as even though you don’t explicitly dereference memory, the compiler may still have to.

It’s worth reiterating that the 35% performance hit was only obvious in an optimised build. Therefore, it is my opinion that programs should be regularly built with optimisations on and only turn them off when you need to debug logic errors. Performance bugs are better investigated using a profiler like perf, in my opinion.

Many programmers may disparage C due to issues like this, but I feel that the offer of a performance gain from understanding how these problems occur is an advantage of the C family of languages over the higher-level languages that abstract that decision away for simplicity, often leaving you with the worse-case performance anyway.

« How SDL2 does its initialisation magic on Windows